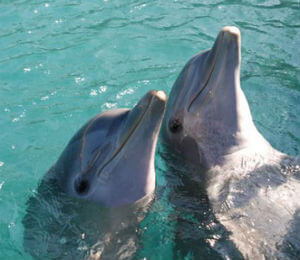 Dolphins are believed by many to be one of the most intelligent mammals around. They are also one of the most social animals. They typically live in small groups called pods that can include up to about 12 dolphins. These smaller pods are known to temporarily meet and form into superpods that can include over 1000 individual dolphins. These groups of dolphin have a rather complex system of communication that includes various noises including clicks, whistles and other forms of vocalizations. It is typical for dolphins to move from pod to pod. Dolphins are known for their altruistic behavior and when a member of a pod is hurt or sick, they will never get left behind.

Another curious fact about dolphins is that they have been observed to demonstrate cultural behaviors not too unlike those of humans. A pod of Indo-Pacific bottlenose dolphins, for instance, teach the younger dolphins to make use of tools. Adult male dolphins can prove to be quite aggressive. And though most pods of dolphins are very tight knit, losing a battle with another male dolphin can send the losing male dolphin into exile.

Dolphins are known to be some of the friendliest animals around. They seem to enjoy every interaction with humans. They are also excellent learners. Dolphins make a wide variety of noises. Some research has suggested that dolphins use specific noises as identifiers, much in the same way that names work for humans, though how extensively their noises are used for this and other types of communication with each other is not fully known.

Dolphin behavior can be observed in various ways. Many tours in the Caribbean and the Gulf of Mexico offer dolphin watches. These tours take you out to a spot on the ocean where wild dolphins live and congregate. This is an interesting way to observe from afar how the dolphins interact, play, behave, and socialize. Another great way to see dolphin behavior for your self is on Dolphin Encounters. These dolphin encounters, of which there are many in the Bahamas, allow you to come face to face with these fascinating creatures. They will demonstrate the extent of their intelligence and behavior right in front of you. Many tours also allow you to actually swim with the dolphins.