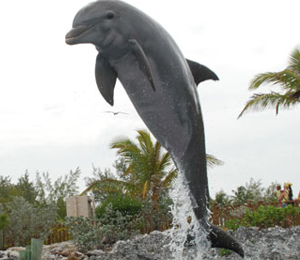 Our oldest female dolphin, born in 1967, is a female named Princess. She has mothered three of our dolphins – Abaco, Salvador and Shawn. As an integral part of our team, Princess has become our dominant female. She has been a member of the family since the 1980s, when she was collected from an aquarium. While Princess is a frequent participant in our dolphin swims, she also performs tricks, like the frontal flip. She loves rubdowns and has established a great connection with her trainers, especially a man named Randy Johnson. Princess loves attention, making her both hardworking and affectionate. Her resilience has made her a favorite among trainers and visitors alike.