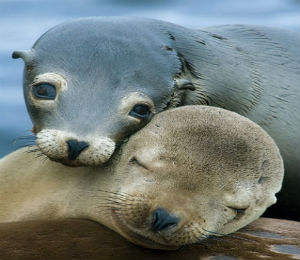 Through observational studies, we have learned a great deal about sea lions. Organized sea lion encounters have brought these marine mammals to the public spotlight. We know about their anatomy, and we understand their mating and pupping habits, molting cycles, social patterns and other behaviors that take place on land. Among the mysteries that warrant further exploration are many of the activities that occur during a sea lion’s time spent at sea.

Sea lions are adapted to dwell primarily in water and to spend periodic durations on land. Watching the sea lion community along the shorelines is easy enough, but observing what goes on under the waves was once challenging. From migratory routes, swimming patterns and diving rituals to habitat choices, feeding strategies and communication skills, sea lions still have much to teach us about their way of life. Thanks to innovations in tracking technology, man's quest for a greater understanding of sea lion life has become easier.

Today, scientific studies of sea lion life underwater are being achieved through remote cameras and data transmission. A sea lion is outfitted with a tiny satellite device, which is worn by the animal to accompany him on all of his activities. One such device is called a time-depth recorder, which enables scientists to track the sea lion's movements underwater and learn important details of his itinerary, including preferred water depths, temperature zones and movement patterns. The data is recorded and transmitted back to the laboratory where the information is then processed and analyzed. The time-depth recorder is usually shed once the sea lion comes ashore during the molting season. Alternately, small cameras are now being worn by some sea lions to capture images, sounds and video footage of their environment, daily activities and encounters.

Why is it important for man to learn as much as possible about the lives of sea lions and other animals around the world? Preservation of a species is one if the foremost benefits of amassing such knowledge. By gaining insight into their world, scientists are able to identify potential threats that may lead to the sea lion’s endangerment. Studies have already demonstrated the effects of some hazards in the aquatic world, including the algae bloom-induced red tide. Pinpointing environmental contaminants and discarded debris, such as supplies used by commercial fishing boats, can prompt the pursuit of legislation to regulate man's activities that threaten the existence of these animals.

As knowledge of the sea lion's lifestyle and physiology expands, advancements in medical treatment and husbandry are continually being made by specialists of marine mammal veterinary medicine, making rescue and rehabilitation efforts increasingly successful. Marine wildlife centers are now better attuned to the needs of sea lions. Once a sick or injured sea lion is taken into one of these facilities, a devoted team cares for the animal and strives to restore his health so that he may be rereleased into his natural habitat. Prior to returning him to the sea, the sea lion is outfitted a monitoring device so that the success of his return to open waters and the outcome of his longevity can be tracked, and marine biologists can continue to learn more about the species.

A sea lion encounter serves to educate the public about these animals. Guests will learn about a sea lion's zoological family, physical characteristics, diet, communication and basic facts about their lives, activities and the dangers that they face. A sea lion encounter also provides the rewarding experience of interaction with these magnificent creatures.