Taking Care of the Dolphin Family 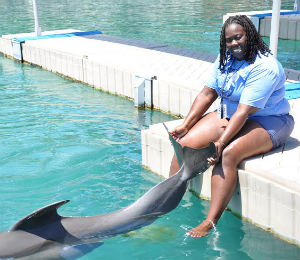 What's the secret to an amazing, memorable swimming-with-the-dolphins encounter? Happy and healthy dolphins, of course! Like humans and other mammals, dolphins can become ill or stressed. They also should have regular checkups to make sure they’re doing well. Fortunately, dolphins that live in captivity have the benefit of modern medicine to cure what ails them and to prevent future problems. And at our Swim with Dolphins Bahamas facilities, we take this hard work seriously to experience the rewards.

The discipline of taking care of dolphins and other mammals is known as animal husbandry, and it involves a surprisingly rigorous schedule of preventive and diagnostic procedures. Venues that offer opportunities to swim with dolphins in the Bahamas typically employ individuals with backgrounds in zoology, who are specially trained in dolphin health. Bahamas Dolphin Encounters of Nassu and Freeport also employ a team of trainers who are adept at communicating with the dolphins and teaching them behaviors that help their caregivers keep them healthy.

Training the Dolphins to be Good Patients

Dolphins are amazing, intelligent creatures. Still, it takes some time for their trainers to be able to communicate with them effectively. One of the first things that new dolphins learn are commands that help their caregivers conduct routine medical exams. Regular blood tests are critical to gauge dolphins’ health and to screen them for illnesses should they seem under the weather. How does a trainer secure a blood sample from a dolphin? Humans typically present their forearms for a blood draw. Dolphins must be taught to present their flukes on command so their trainers can take blood samples.

A Word on Dolphin Anatomy

Most people who swim with dolphins in the Bahamas have a limited knowledge of the anatomy of these amazing creatures. What most people simply refer to as a dolphin’s tail actually is comprised of several distinct segments: the base (where a dolphin’s tail meets its body) is called a peduncle. At the end of this peduncle are two flat halves that are called flukes. The area where the left fluke meets the right fluke typically is called the dolphin’s median notch.

Because trainers draw blood needed for testing from the fleshy underside of the flukes, dolphins are trained early on to present their flukes upon command. Trainers also must teach dolphins techniques to facilitate ultrasound screening in the event that it becomes necessary.

Like all intelligent creatures, dolphins want to make their loved ones (in this case their trainers) happy. They thrive on positive reinforcements and rewards, and that is exactly how most dolphin trainers in the Bahamas approach their students.

Essentially, trainers have a list of specific commands that correspond to specific actions that they want the dolphins to take. First, trainers demonstrate a command and the action they want the dolphin to take upon hearing that command. They repeat this demonstration multiple times until the dolphin “gets it.” Then they practice by giving the command to the dolphin over and over again. Each time the dolphin responds correctly, its trainer rewards it by giving it a toy, a treat, or an abundance of attention. (Dolphins are social creatures, and they love nothing more than undivided attention from their trainers!) When the dolphin fails to respond correctly to a command (as happens often in the beginning, while they’re still learning), the trainer simply does nothing, waits a few seconds, then tries again.

Eventually, dolphins learn the meaning of these commands, which are so important to keeping them healthy. The bond between dolphin and trainer is truly amazing. If you ever have an opportunity to swim with dolphins in the Bahamas, you’ll be able to see it firsthand.